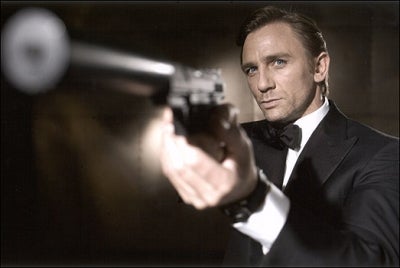 Meet the new Bond
Actor Daniel Craig has been confirmed as the new James Bond.
The English star of gangster film Layer Cake, who arrived at a press conference in London by speedboat, will play a tougher, grittier and darker 007.

"It's a huge challenge. Life is about challenges and this is one of the big ones as an actor," said Craig, 37, who will be the sixth James Bond.

He joked he "had a couple of Martinis" when he got the role. Casino Royale is due to start filming in January.

"We've got an incredible script and that's my first line of attack," he said. "Once I'd read that, I realised that I didn't have a choice. I had to go for it."

Daniel Craig arrived at the James Bond press conference by boat
He admitted taking the role was a big responsibility but added: "I've just got to step up to the plate and deal with it."

Bond was "a huge iconic figure in movie history and these things don't come along very often", he said.

Craig told reporters: "Together with Martin, I want to make the best film we can, the most entertaining film we can."

The actor said he was not looking to redefine the role, but added: "It's a question of taking it somewhere maybe where it's never gone before."

Craig said he had received encouragement from predecessor Pierce Brosnan and had tried to think of it "like any other job".

He also admitted there was a danger of being "trapped" by being stereotyped in the role.

Producer Michael G Wilson said the film-makers considered more than 200 actors from around the world over two years before settling on Craig.

Neither Q nor Moneypenny will appear, Mr Wilson added, but M will return. However, it was not confirmed whether Dame Judi Dench will play the spy chief.

Producers are now setting their sights on finding a female star to fill what Mr Campbell said would be the "best Bond girl part" ever.

Casino Royale will be an adaptation of author Ian Fleming's first James Bond novel, in which the spy was introduced as a more youthful and cold character than he has been portrayed on film.

"I certainly think it will be a little bit darker - that's not to say it won't have its sense of humour, of course it will have that," Mr Campbell said.

Mr Wilson also revealed work had already started on the 22nd James Bond film, which would be Craig's second as 007.

The actor's first major role was in the BBC Two drama Our Friends in the North in 1996 and he rose to prominence in Hollywood alongside Tom Hanks in Road To Perdition in 2002.

He has since played poet Ted Hughes opposite Gwyneth Paltrow in Sylvia and headlined Layer Cake, which co-starred Sienna Miller.

He is also to appear in Steven Spielberg's new drama Munich, about the Olympic massacre of 1972.